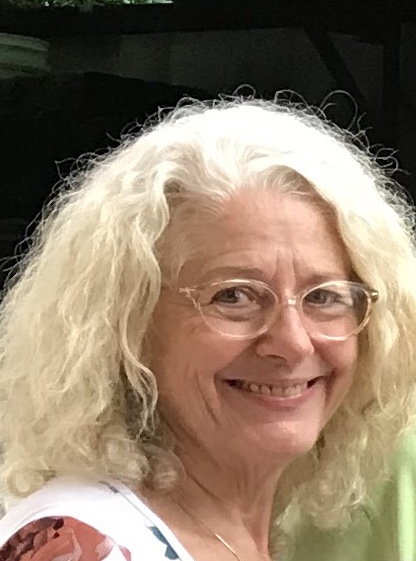 Susan Grace Branch is a native-born Oregonian. Her love of the forests, fields and oceans of the Pacific Northwest along with their flora and fauna have called her back to her home state, most recently from southern Arizona. Susan's home is now in McMinnville, Oregon where she keeps studios for both wall art and jewelry making (wearable art.) Being here has certainly already influenced her creati...ve work. She is looking forward to more opportunities to deepen and expand this process.

Susan's artistic style would be considered eclectic, the consequence of a life-long fascination with possibility thinking, looking for the patterns that connect thoughts, ideas and philosophies inside of disciplines and between disciplines. Much of her work has been with diverse groups and with cross cultural groups. Susan is skilled in finding common ground with diverse groups and facilitating people to do the same. She finds it exciting to see people and groups celebrate and learn from their similarities and differences. Having studied, lived and worked interstate and internationally has been formative to this skill.

Susan has work represented in the permanent collections of the National Gallery of Victoria, Australia, The Western Australian Art Gallery, The University of Iowa and in many national and international personal and professional collections. Susan has earned B.A. Art Education, B.A. in Three-Dimensional Design, M.A. in Jewelry and Metalsmithing, M.F.A. in Multimedia.

Artifacts Cuff Bracelet: Curvilinear Relationships #1 Fine Art by artist Susan Grace Branch - Description: One could say that everything known exists in relationship to everything else. This is one representation of that relationship.
SOLD 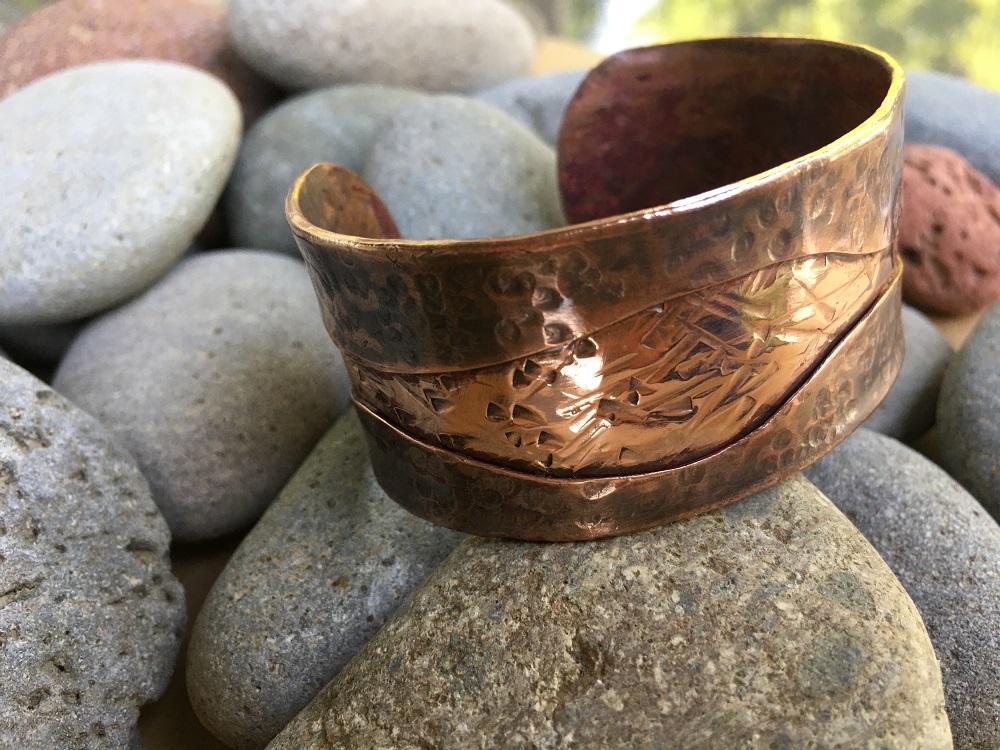 Beyond the River's Bend Fine Art by artist Susan Grace Branch - Description: My husband grew up in Perth, in Western Australia. On a visit he took me to this place where he and his brother would launch a raft and spend the day having an adventure floating downstream. With this painting I wanted to capture the memory of the place and the magical time of river adventures. You never know what is just around the bend in the river! Paint applied with painting knives. Acrylic on stretched canvas. 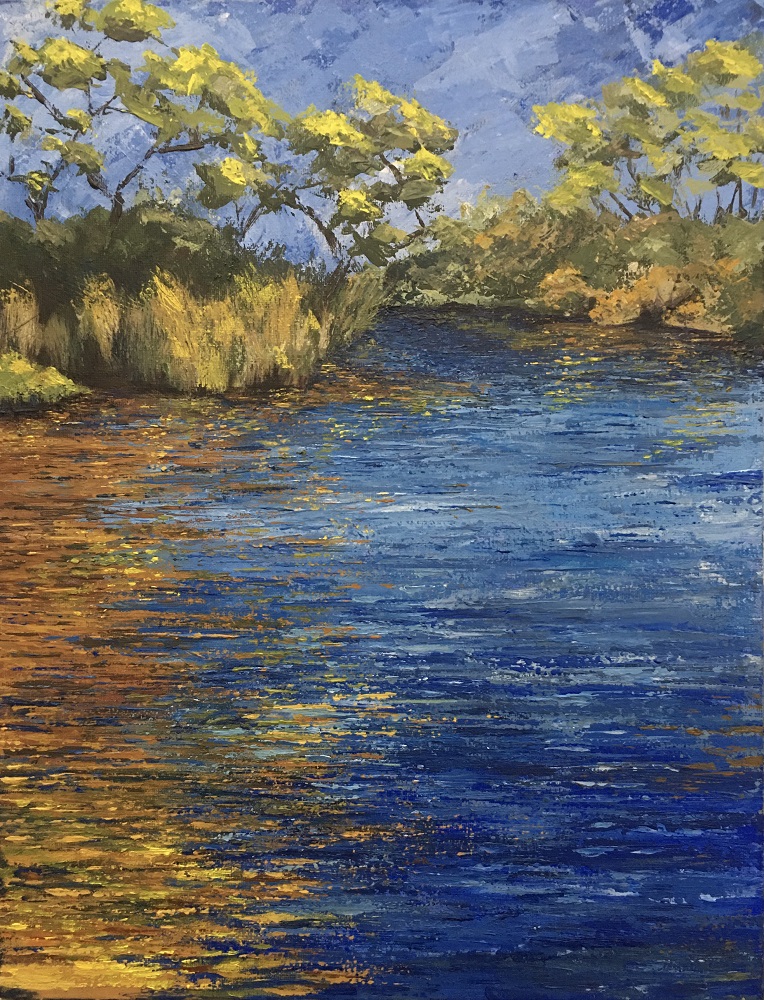 Beyond the River's Bend 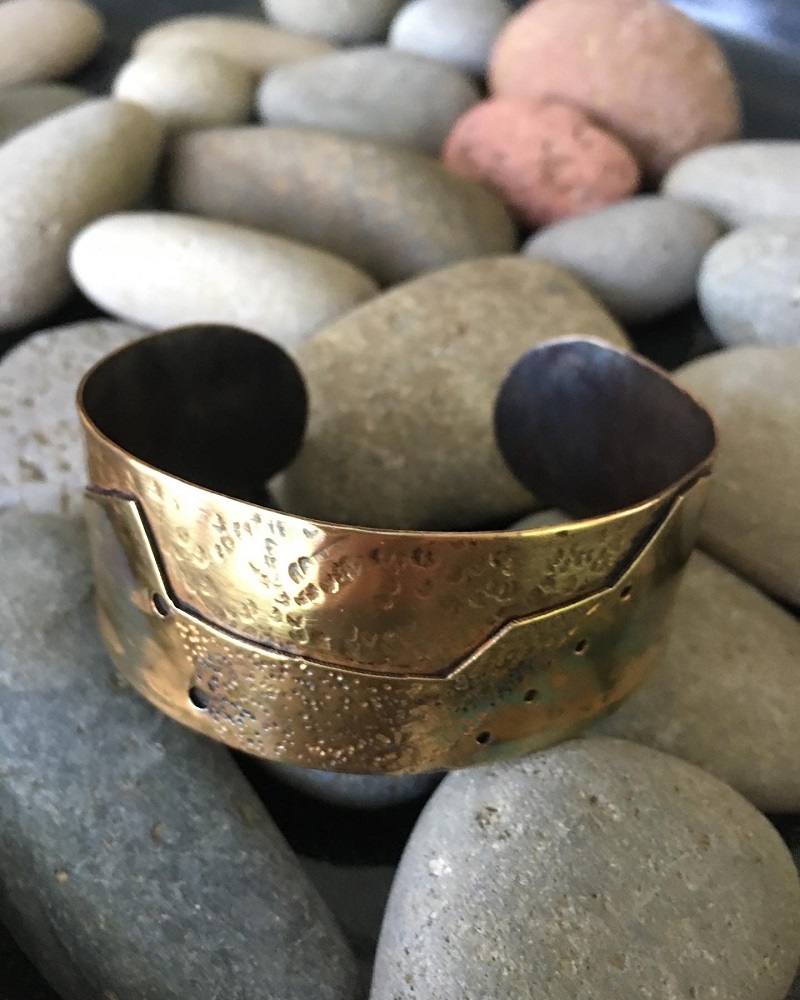 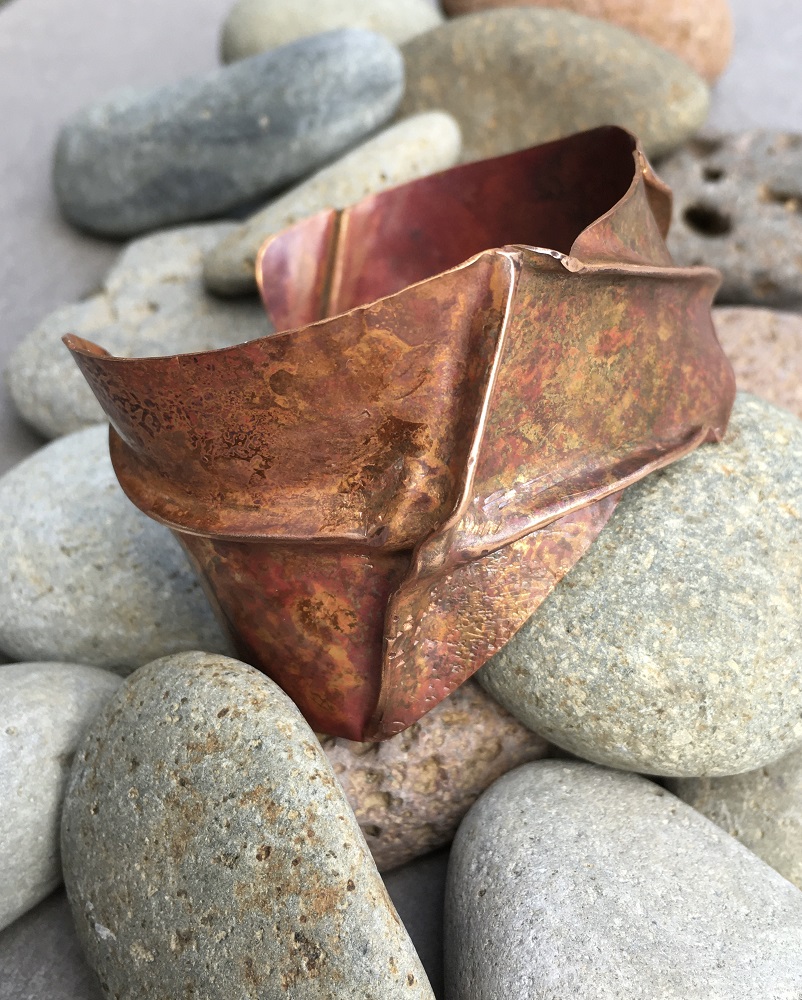 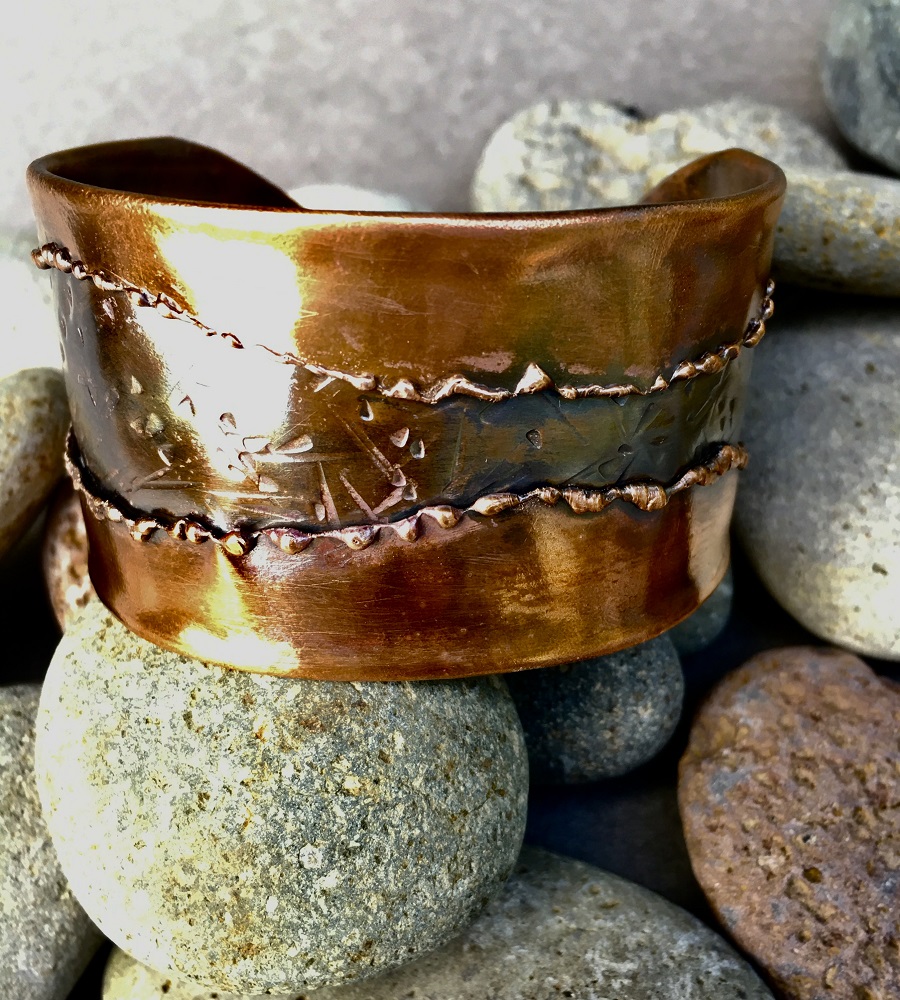 $195 + Free Shipping
Bracelet - Artifacts Cuff Bracelet: Ride the Waves Fine Art by artist Susan Grace Branch - Description: In this Ancient Cuff Susan wanted to show a balanced relationship between technology and nature. She loves using texturing and patination of metal to portray these elements of art. 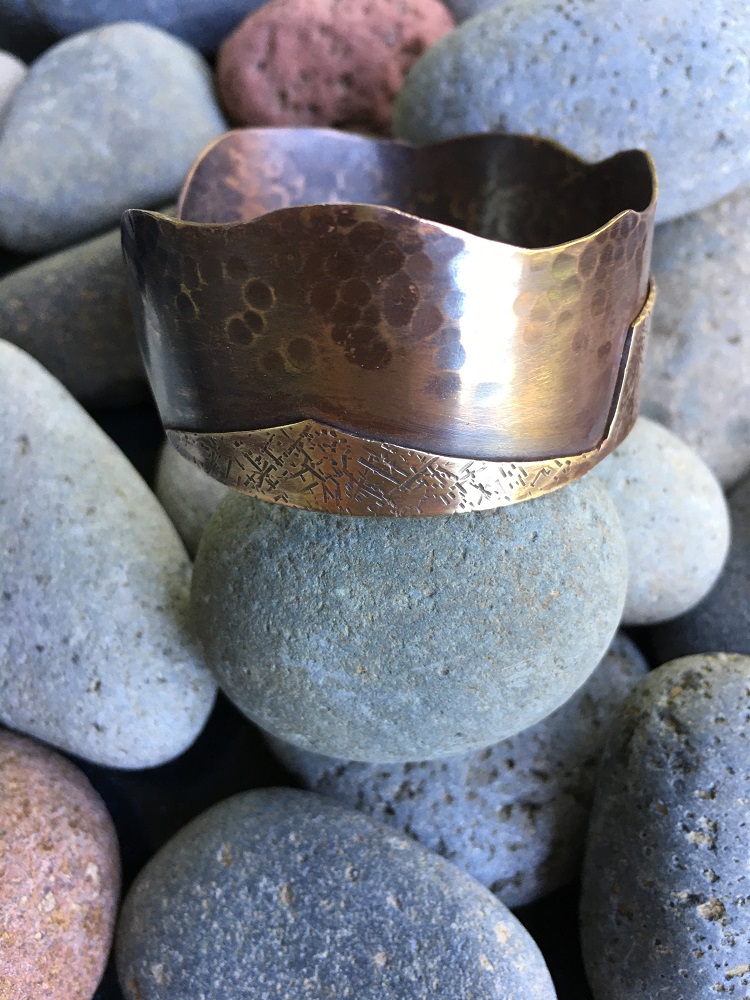 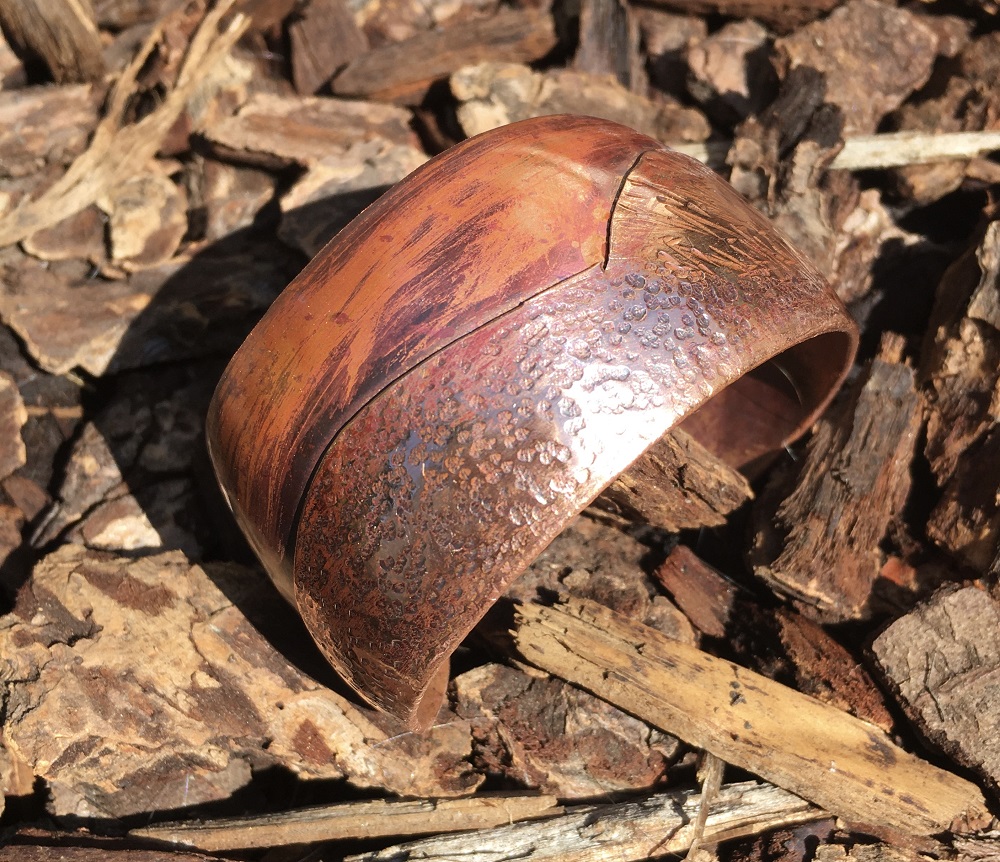 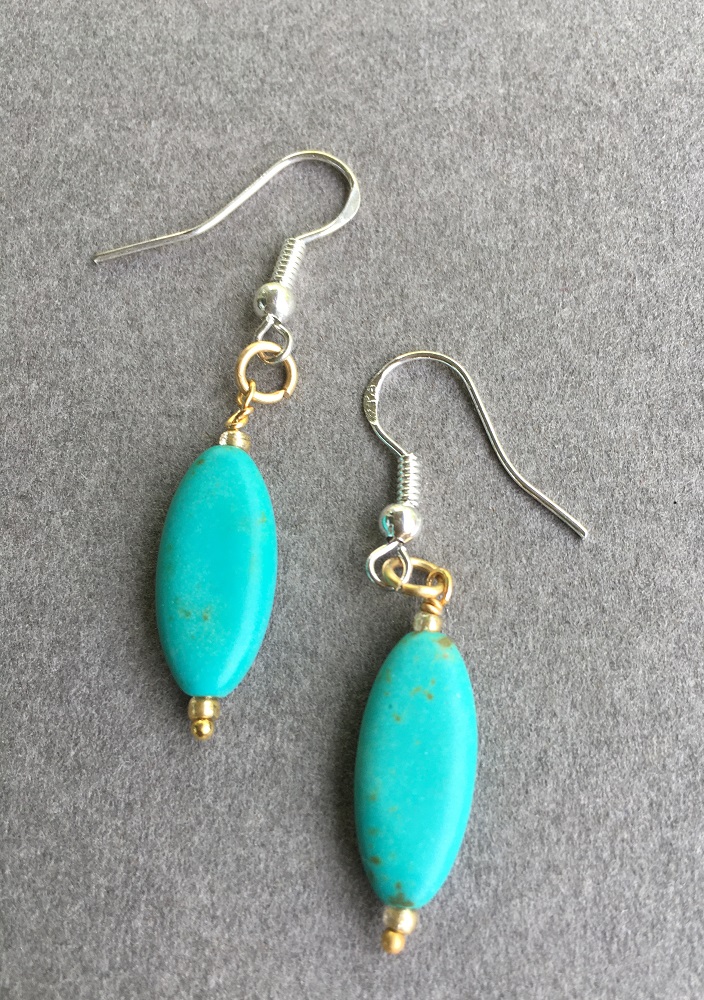 $40 + Free Shipping
Flowing to the Ocean Fine Art by artist Susan Grace Branch - Description: In this painting I wanted to capture the essence of the People's Coast. The cloudy sky, land, stream and ocean converge with the beauty of this lovely coast. I chose painting (palette) knives to create this painting to help capture the energy of this convergence with the tranquility of the moment. 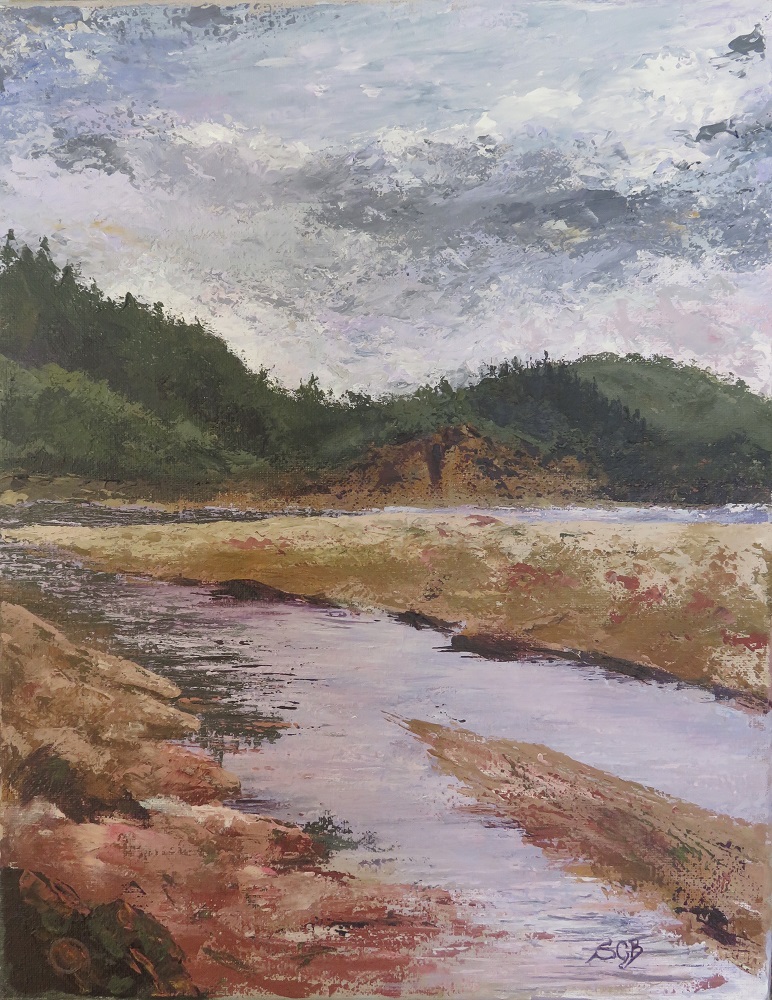 Flowing to the Ocean 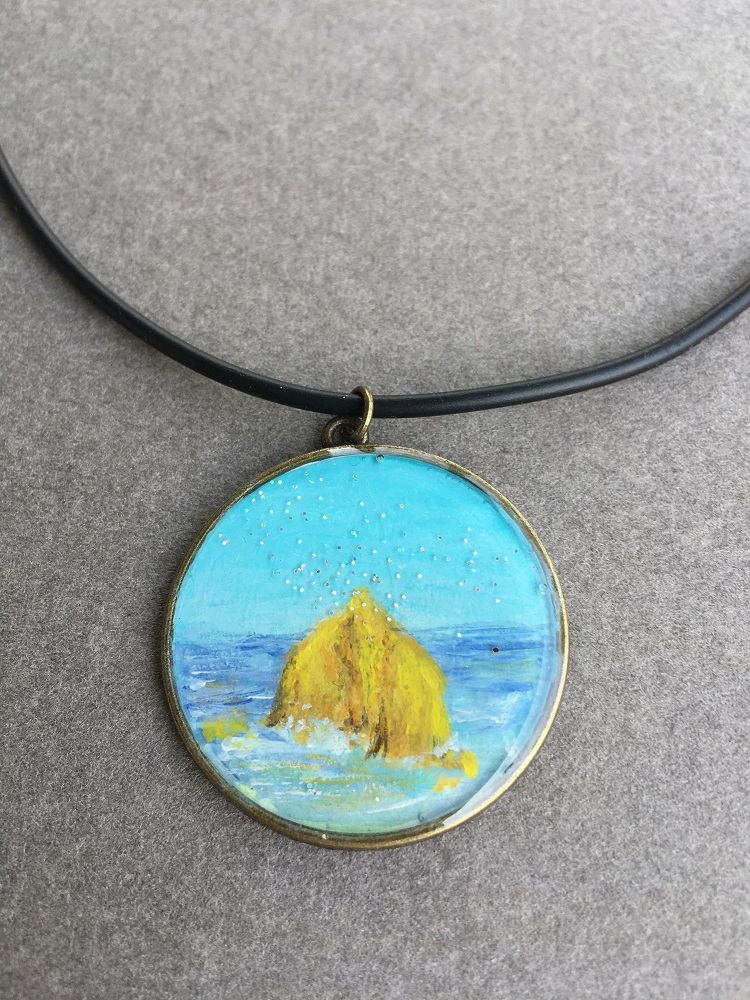 Guiding Lights Fine Art by artist Susan Grace Branch - Description: The moon is one of my favorite subjects to paint. There is a beauty in the night that is brought forth by the moon. The moon in relationship with lighthouses adds the mystery of the night and connection between land and sea, the earth and the sky. All is well. 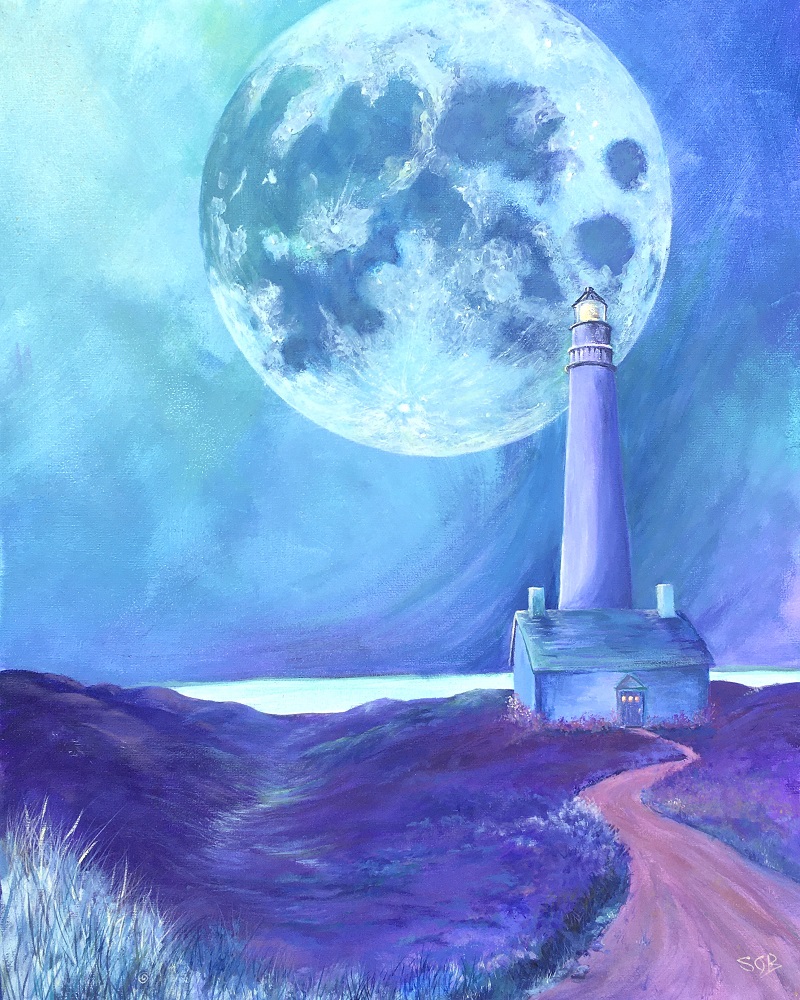 $475 + Free Shipping
Highland Spring Fine Art by artist Susan Grace Branch - Description: A Springtime road trip through the Colorado Rockies inspired me to create this work. I wanted to capture the feeling of altitude, spring weather, layers of geography and clarity of the air in the mountains. To achieve this I have used a number of techniques and materials to help capture this essence. The sky is a wet technique using a wash and pulling out paint here and there to create clouds, scraping semi dried paint at the bottom of the clouds to give the sense of rain. The crispness and layering of the mountains is achieved with collaged painted papers. Molding paste mixed with acrylic paint creates the foreground meadow texture. Brush and sea sponge complete the details of grasses and flowers. 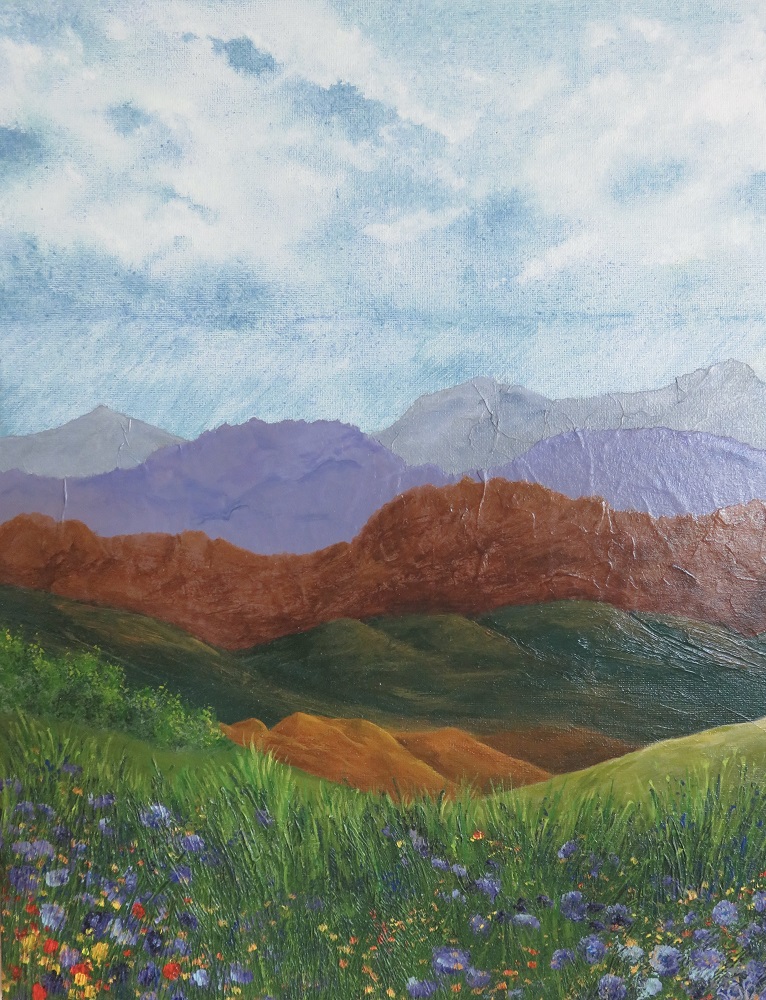 $460 + Free Shipping
Morning Glory Fine Art by artist Susan Grace Branch - Description: The beginning edge of day when we see the stars fade and the clouds begin to be painted by the sun. This is a delightful time of day to allow nature to fill our minds with whispers of wonder. This wonder is what I want to capture and share in this painting. It is painted primarily with painting knives (aka palette knives) and is inspired by the southern Arizona landscape where I lived on and off over 16 years. 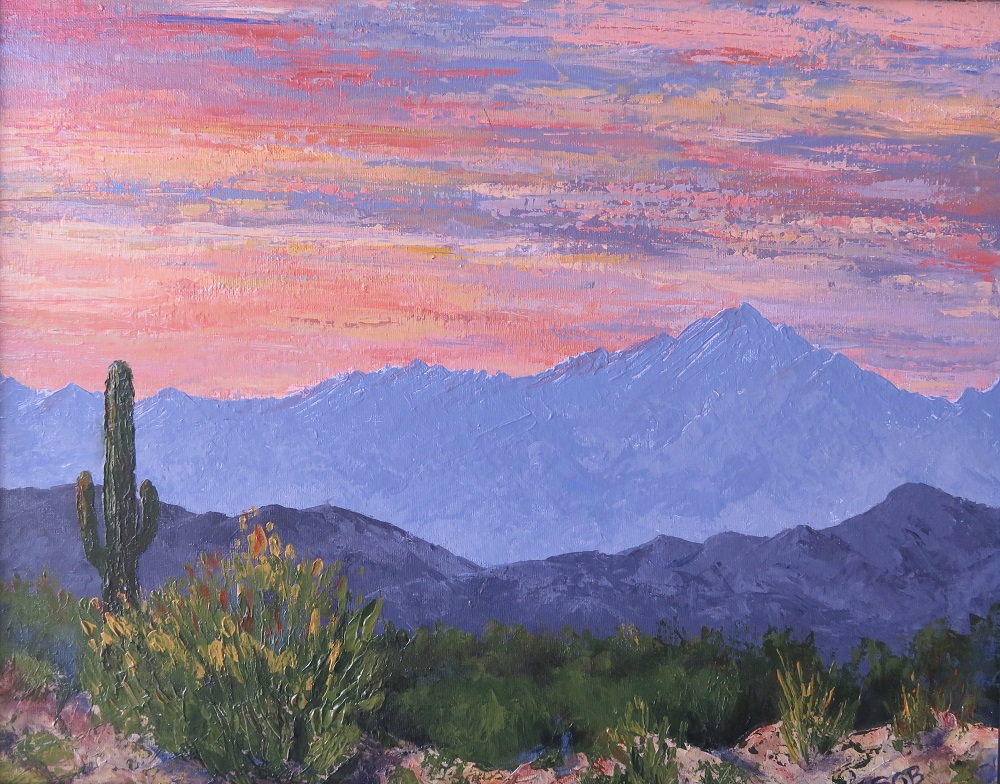 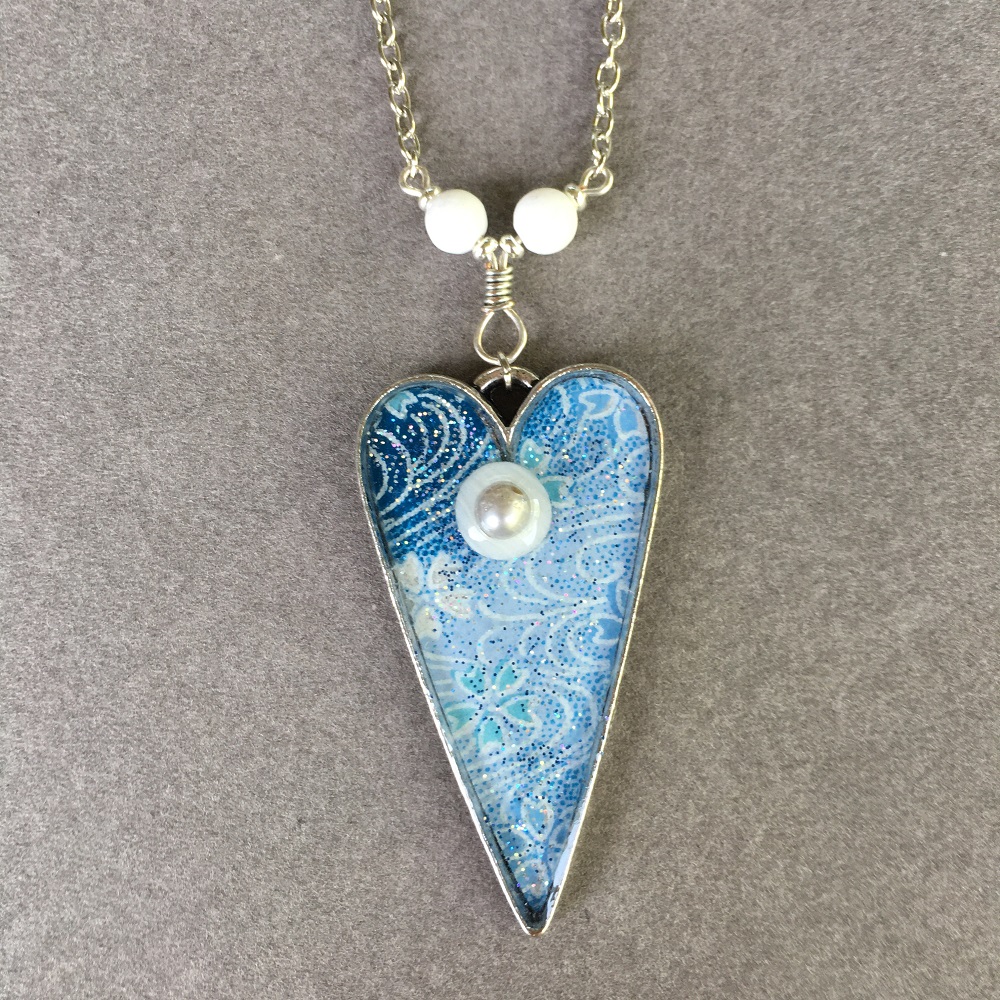 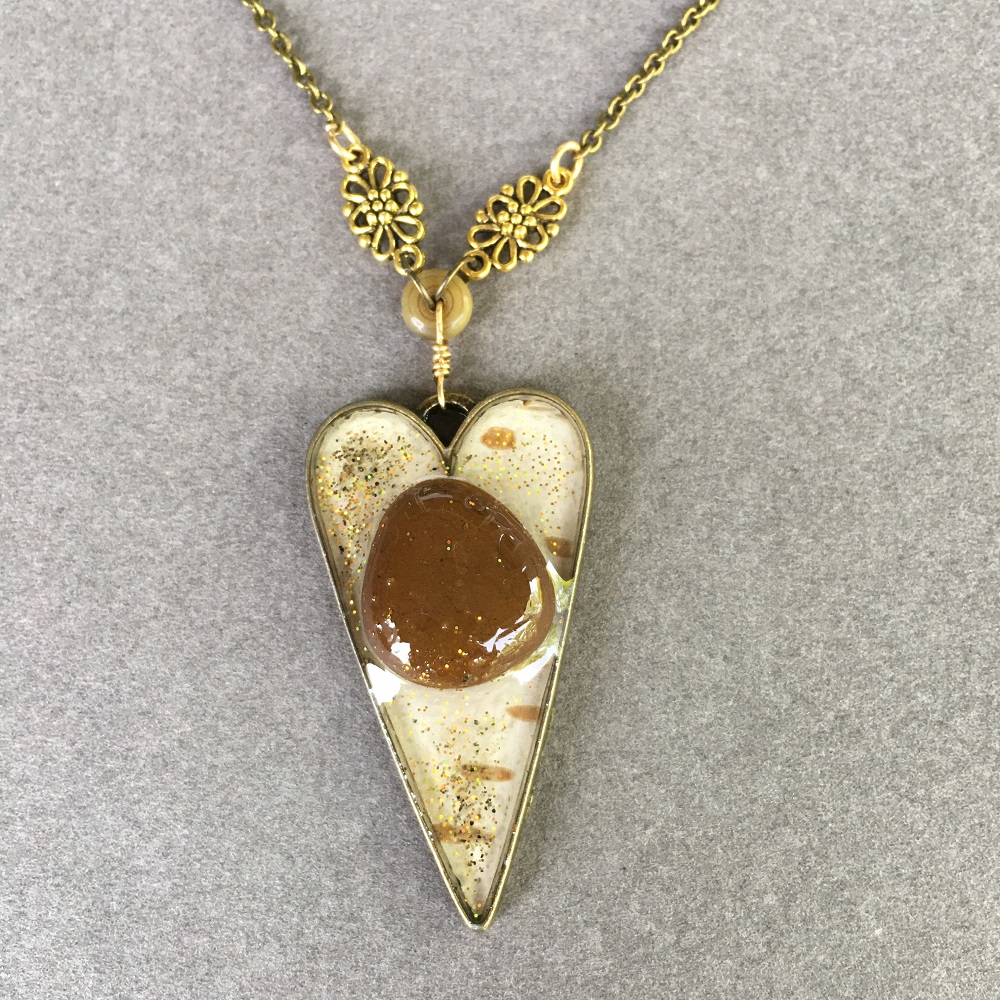 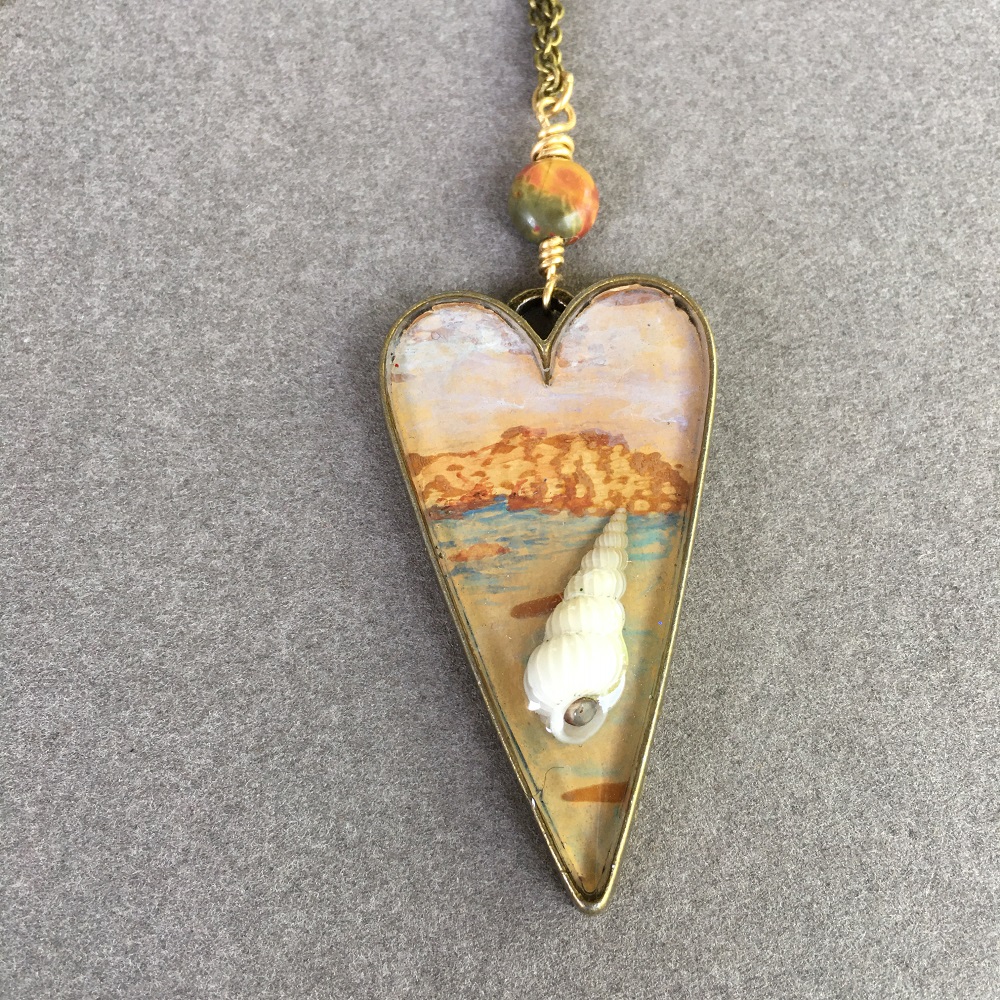 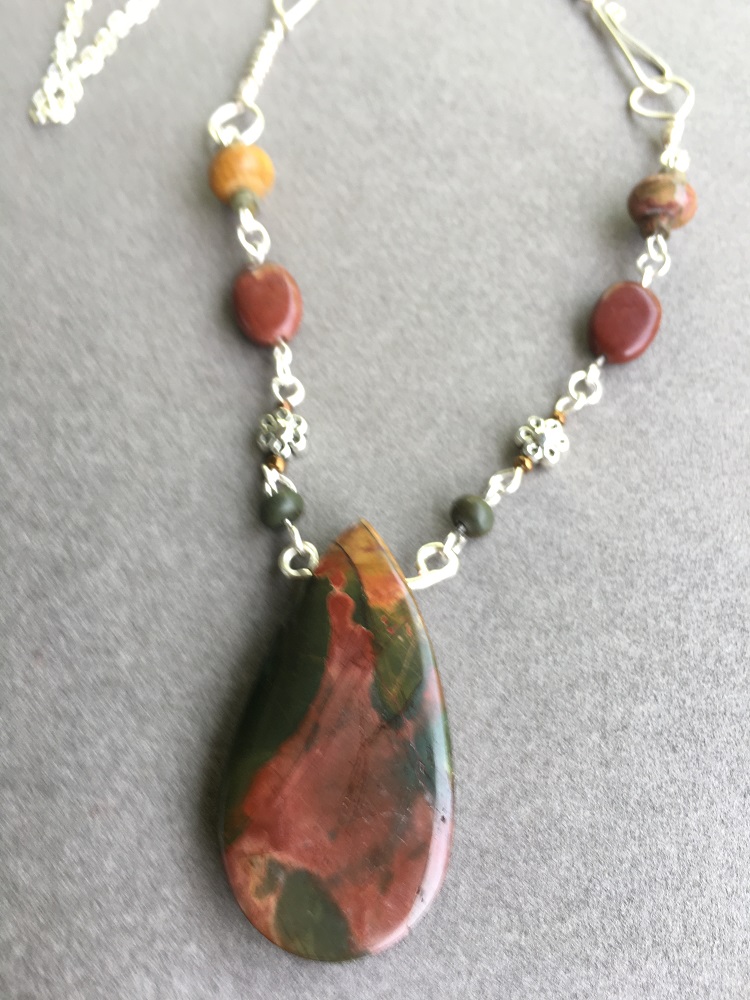 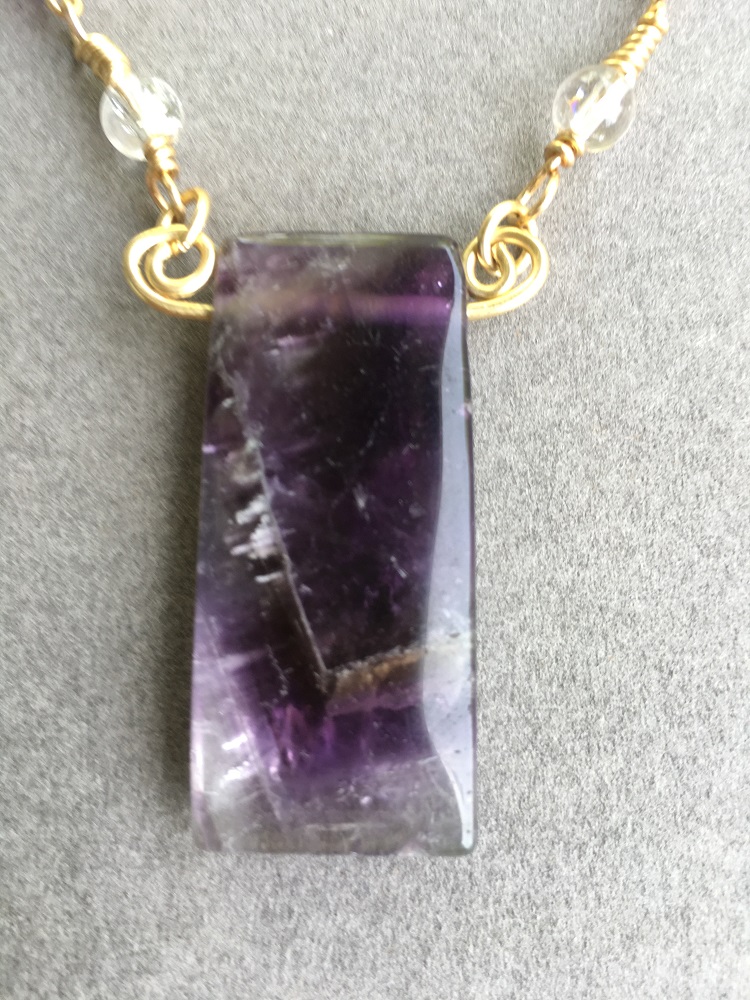 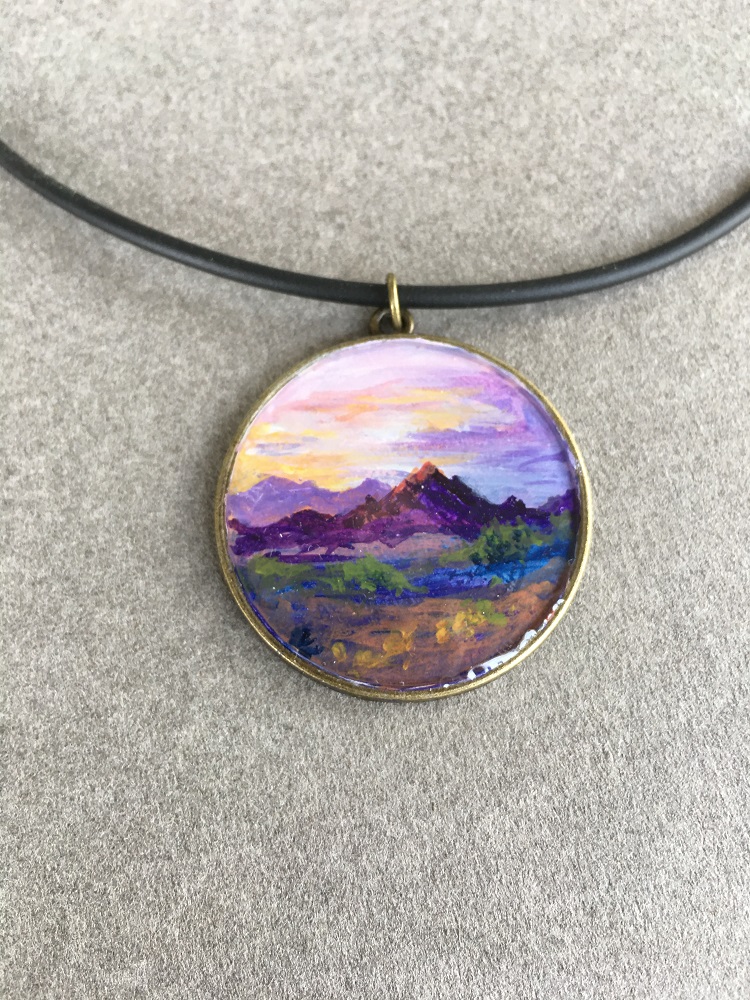 Necklace - Dawning of the Day painting 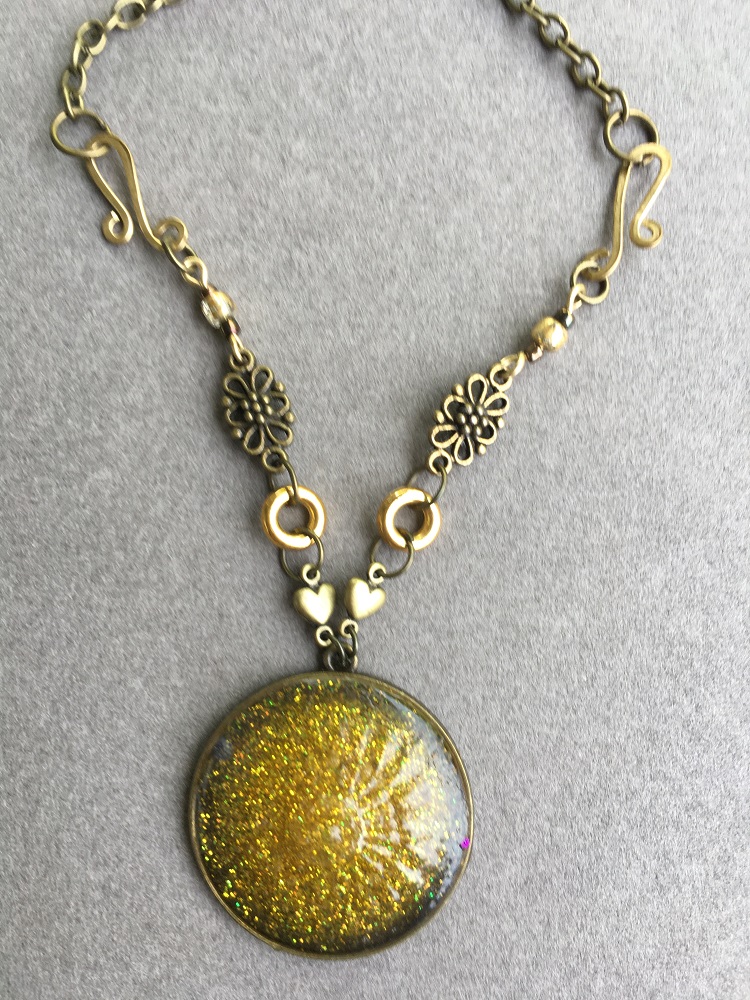 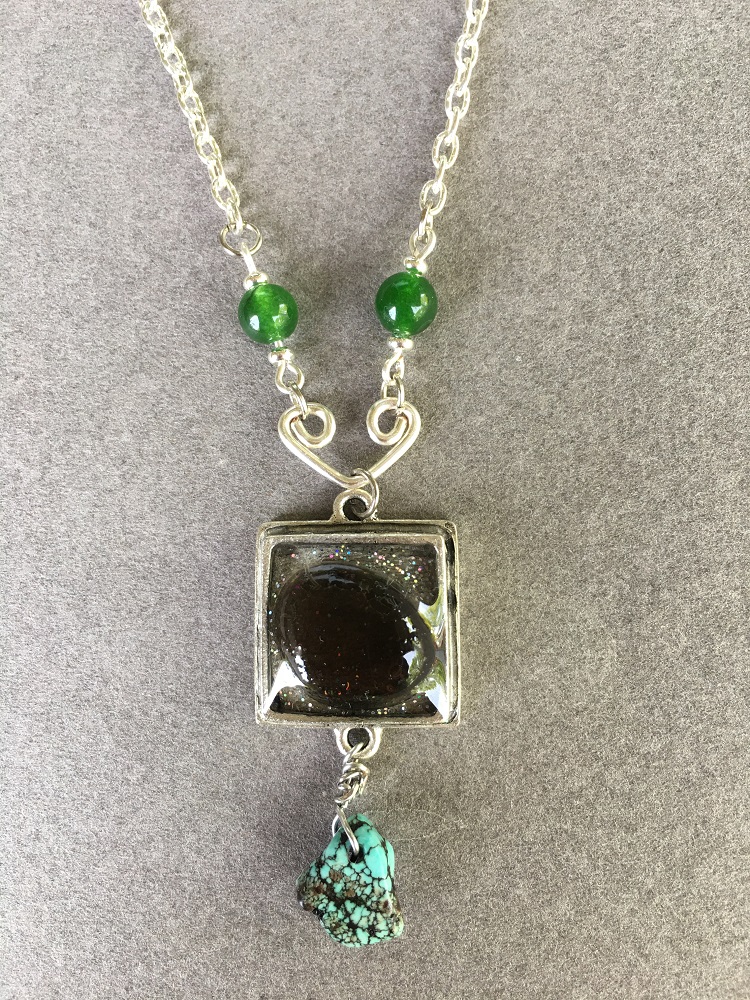 $140 + Free Shipping
Necklace - Guardian of the Lake painting Fine Art by artist Susan Grace Branch - Description: Acrylic paint sealed and domed with jewelry grade resin. The strong , calm energy of these sleeping volcanoes inspires a sense of awe and guardianship that is lovely to wear. 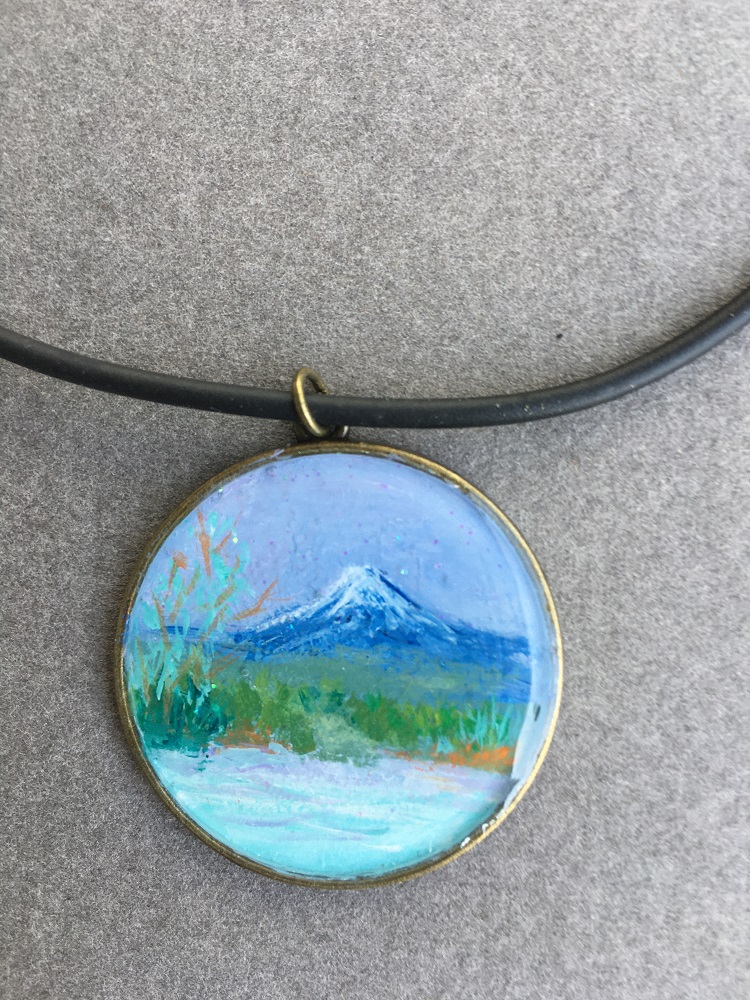 Necklace - Guardian of the Lake painting

$130 + Free Shipping
Necklace - Heartfelt Fine Art by artist Susan Grace Branch - Description: Pink tourmaline quartz, Rhodonite, pearl. These subtle pinks, blues and greens are so calming and relaxing, and they match so many other colors! Yours to wear! 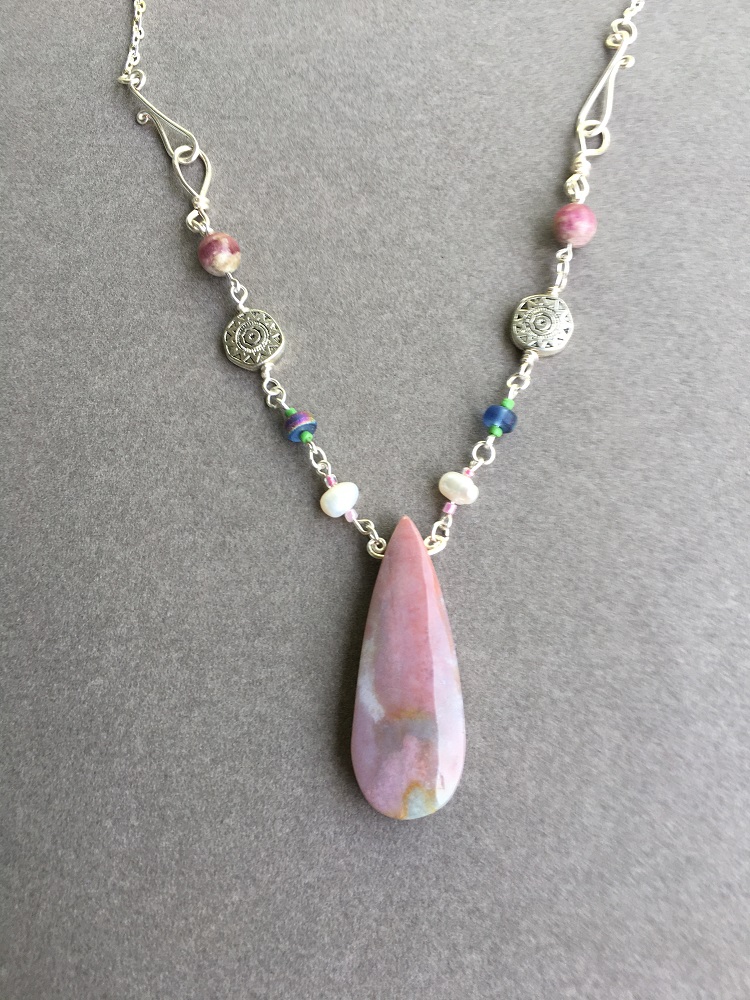 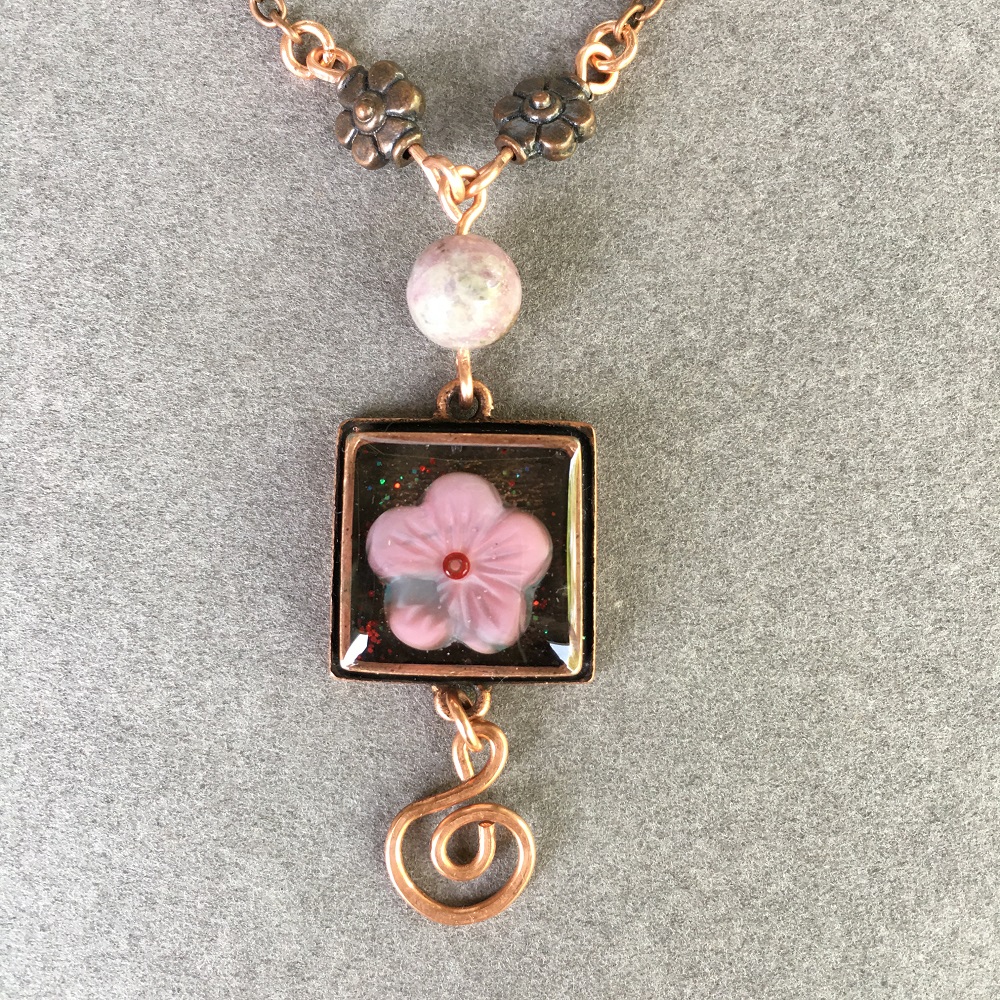